Get your free gift 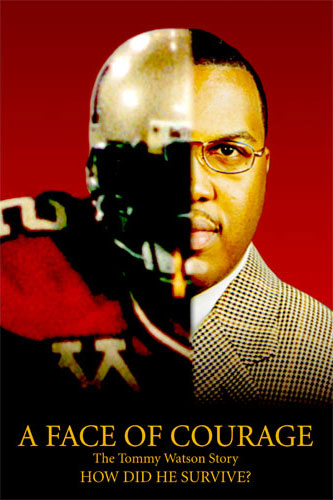 Thank you so much for connecting with us – get your free gift now!!!!

As many young people growing up in poverty will attest to, it is hard to keep on the straight and narrow. Around every corner is the temptation to turn to drugs, gangs and violence and Tommy Watson knows as well as anyone about this enticement. Struggling to overcome physical abuse, abandonment and drug problems, Watson shares his inspiring story in A Face of Courage: The Tommy Watson Story.

Growing up in the Five Points area of Denver, Col., he had more than a couple of strikes against him. Out on the streets he was witness to violence and drug trafficking, but it was his parents’ addiction to heroin and his father’s violent temper that left a lasting impression on Watson.

As a child Watson and his siblings were often left uncared for and unsupervised as his parents found their way in and out of prison for their illegal means of employment. As a teenager though, Watson turned to basketball and football and found great success on the football field. He rode that success to the University of Minnesota where he played college football.

Watson was consumed by his dreams of playing in the NFL, but a career-ending injury shattered his dreams and left him once again searching for his path in life. Instead of giving up, Watson focused on his education and decided that he wanted to help young people like himself, so he became a principal.

A Face of Courage is an open, honest portrayal of Watson’s life, and in it he shares with sincerity many of the trials he has encountered. He shares his failures and his success and hopes that through his story he can help to inspire others like him to choose the right path and free themselves from the streets.

The Resilience of Champions!
From homeless and living out of a trunk to star athlete to college graduate, Dr. Tommy A. Watson shares the 6 habits, backed by personal experience and research, that highly resilient individuals and organizations such as Oprah Winfrey, Bill Gates, McDonald’s Corporation, Mary Kay Cosmetics, and other well-known leaders and companies possess to survive and thrive beyond any and all obstacles.

Dr. Watson provides an inside look into one of the world’s most impressive leadership development training program that is known for developing leaders worldwide, including current McDonald’s CEO, Donald Thompson. Dr. Watson entered the leadership program after being fired from a job due to a lack of leadership skills. He would later go on to win the prestigious McDonald’s Leadership Award.